Saturday 7th March marked the Grand Final of the LSA CA Classics Competition 2020 where four finalists, shortlisted from video entries submitted by 11-19 year old students from across the UK, came to AKS Lytham to deliver their presentations and tell the 100-strong audience about the three ancient characters they would invite to a party.

The approaches to this task were diverse and displayed such creativity, thoughtful research and passion for the ancient, and particularly mythological, world. We were delighted to be joined by Classics Education expert Dr Arlene Holmes-Henderson (King’s College London; Advocating Classics Education; Classics in Communities) as our judge for the day and she created a lovely, relaxed environment for the finalists before they took to the stage.

The ‘before’ shot of the Four Finalists and Judge

First up, representing Kirkham Grammar School, was 2019 Champion Thomas Hewitt, who gave a tremendously polished and erudite performance, conveying his real passion for history and the historians who bring it alive, through his choice of Herodotus, Livy and Tacitus for his ideal dinner-party conversationalists.

Seeking to avoid the drunken antics of many an infamous convivium, Thomas focused on the characters, life experiences and intellects of these three men and hoped that they would be able to cast some light on the mysteries that surround, for example, the lost books of Ab Urbe Condita and Tacitus’ choice to begin his Annals after the death of Augustus. So long as there wasn’t too heated an argument about the latter’s inclusion of gossip as source material for his works, it seemed like an ideal combination of guests that would offer an exciting insight into the methodologies and interests of those who have shaped our understanding of the past for so many centuries.

Katherine Baker, of Bolton School Girls Division, followed Thomas and opted for a slightly different dynamic at her party. Entitled ‘The Profane, The Witty and the Sacred’, she wanted to see how Caligula, Cicero and Artemis might all fare at a social gathering – an interesting combination indeed! 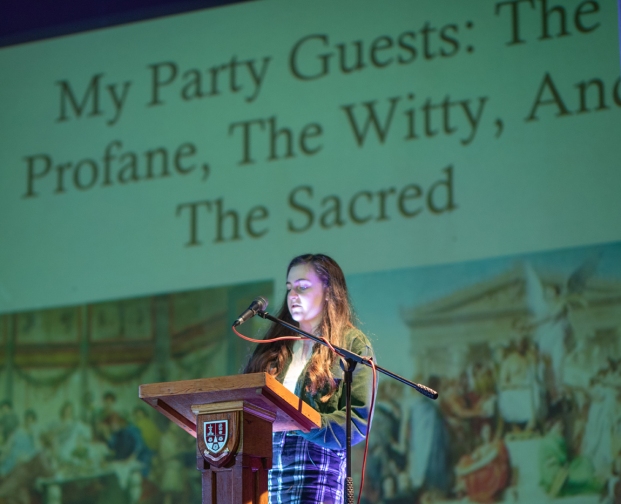 For Caligula, she hoped to divide the fact from the fiction and see if his sensible policies could be reconciled with his renowned sexual depravity, suggesting that perhaps he is simply misunderstood! She hoped that Cicero would bring his best jokes and sparkling wit to the table, a sometimes overlooked aspect of his character, whilst Artemis, “the original man-hating feminist” might use this opportunity to “let her hair down and lighten up a bit” rather than continue her vicious reactions against those who slight her (think of poor Niobe, whose children suffered in a violent “act of family solidarity”). Katherine encouraged us to consider Artemis’ paradoxical protection of animals and her championing of the hunt – but, she noted, this party might quickly turn into a riot!

Jess Harris, sixth-former at Runshaw College, adopted another very different style, launching into a humorous, first-person narrative that imagined her party as a house-warming event to meet her rather eclectic fictional neighbours.

Assisted by anecdotal advice and quips from a myriad literary friends such as Ovid and Homer, Jess explored the characteristics of her party guests, from Orpheus the Musician (“a liar and a player”), to Arachne the Seamstress (“with a few too many legs to be human”), and Tantalus the Dead (“at least I won’t have to worry about the quality of my cooking!”). She unified the mythical world with great style and panache, fulfilling the brief and offering a unique spin on it, and enthralled the audience with her well-woven tale.

Finally came Connor Irving of Clarendon Sixth Form College in Ashton-Under-Lyne, and he personalised his scenario from the outset, demonstrating his longstanding fascination (or ‘obsession’ according to his family) with mythology. He introduced his first party guest with a musical accompaniment (Ava Max’s “Sweet but Psycho”) – Medea, a “modern spirit in an ancient world” – and his second as a close family connection, Pasiphae, Medea’s aunt and mother of the Minotaur (“she likes a bit of beef”). 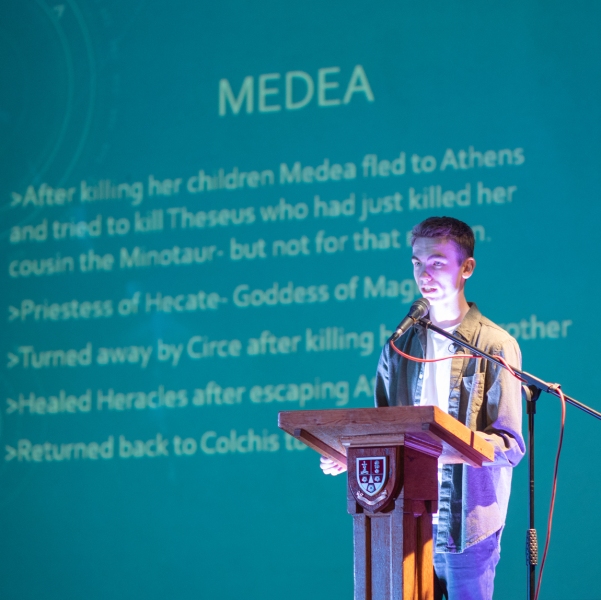 Aunt and niece appear never to have met and would provide fascinating subjects on an episode of ancient ‘Long Lost Families’, hopefully offering answers to such mysteries as what happened to Pasiphae after the death of Minos, and just who was the better sister out of Pasiphae and Circe? Since Dionysus could bring the wine (but maybe not the chat), Connor instead chose Hades as his third guest (complete with puppy pictures of Cerberus) as another psychologically scarred character who, after being eaten and regurgitated by his father, was hated by most of mankind, to improve his reputation in the afterlife of modernity.

Dr Holmes-Henderson had a very tough decision to make as all four finalists had dazzled with their level of research, personal touches and well-delivered presentations. Whilst she deliberated, the audience cast their own votes and were treated to a screening of a video entry that had really caught the Committee’s attention – a Highly Commended and self-edited presentation by Ariel Harris, a 13 year old student from St Helen’s School, Northwood who chose Dionysus, the Frogs and the Chimera as her ideal guests. Congratulations must also be extended to the other Highly Commended contestant, William Wauchope of Harrow School, for his polished presentation on Herodotus, Socrates and Hypatia.

Once the votes were totalled, the People’s Choice Award was announced and after a very closely-contested competition, Jess Harris was revealed to be the audience’s winner! 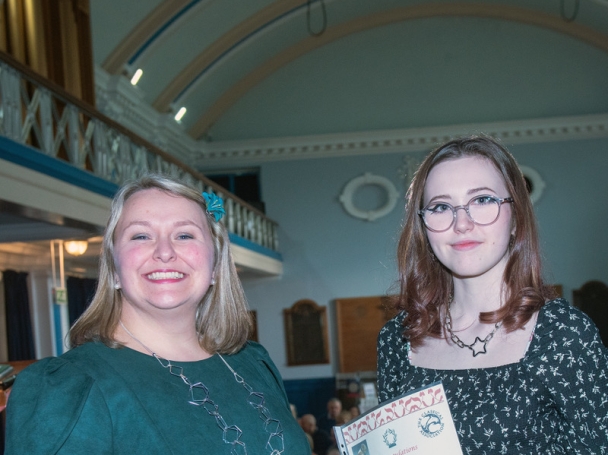 Dr Holmes-Henderson then offered very helpful and encouraging feedback to all of the finalists and captured the mood of the room when she expressed her amazement at the eloquence, professionalism and keen wit of these young classicists. She then declared the overall winner to be… Connor Irving for his splendid grasp of character, humour and carefully considered trio of guests.

There was a second place for Katherine Baker for her fantastic use of wit and risk-taking in her choice of guests and party setting!

All four finalists should be extremely proud of their endeavours. It was, as ever, a highly competitive final with an excellent standard of work and delivery and we look forward to hearing more from these young classicists and historians in the future.

And the ‘after’ shot… a very successful day!

The LSA CA would like to thank the Classical Association for their generous support of this event – the highlight of our outreach calendar – which aims to give students from all over the UK the chance to research the ancient world and present their findings in a creative way in front of a friendly and supportive audience. Details of how to enter our next Classics Competition will be revealed in 2021 – until then, read, watch, listen, create your own classical content and let us know! We’re always keen to welcome new Student Ambassadors and writers for our student-edited Newsletter. Applications for our Student bursary scheme are also now open. Well done again to all entrants!