In a lecture delivered to the LSA Classical Association in November, Professor Andrew Wallace-Hadrill enthralled an audience of over 300 by exploring what life was like for those living in Pompeii and its neighbouring town Herculaneum before and during the fateful day of the eruption of Vesuvius in 79 AD. Classics Ambassador Thomas Adamthwaite relives the lecture:

Professor Wallace-Hadrill began by taking us back to mid-October 79 AD (a revised date rather than 24th August 79 AD, as traditionally thought) when the initial violent eruption spewed a column of volcanic debris and hot gases up between 9-19 miles high into the stratosphere. This initial eruption lasted for eighteen to twenty hours and produced a column of pumice and ash that travelled southwards from the volcano due to the prevailing winds and buried Pompeii under 2.8 m (9.2 ft) of the pumice and ash. Meanwhile, pyroclastic surges buried Herculaneum in about 20m of molten rock, making it significantly harder to excavate than Pompeii and consequently less well known.

After his initial background information on the eruption, Professor Wallace-Hadrill then introduced us to the Italian Archaeologist Amedeo Maiuri (1886-1963), one of the most important people to excavate the ancient city during the twentieth century whose aim was to restore the site to its former glory as far as possible. He became chief archaeologist at the site in 1924 and after the end of World War II he managed to rapidly excavate ten insulae in ten years. Maiuri made many famous discoveries, including uncovering the House of the Surgeon and the Casa dell’Efebo, but Professor Wallace-Hadrill chose to focus on his unearthing of evidence for the life of one particular man – Amarantus.

Professor Wallace-Hadrill’s enchanting tale of Amarantus begins when Maiuri first uncovered his house and bar from 1952-1953 but then effectively abandoned it in his typical tendency to uncover things and then hastily move on to the next area. Fortunately, however, Professor Wallace-Hadrill and his team re-excavated the site more thoroughly in 1995. It was evident that the first room of house 11 served as some sort of wine bar with a counter top at the front of the room with a couple of small service rooms behind, leading to a large overgrown garden area at the back. Next to the bar was what appeared to be the living quarters of the bar owner (house 12). Maiuri had left behind a large number of amphorae in this area. Professor Wallace-Hadrill soon discovered the name of the proprietor of the bar to be “SEXTUS POMPEIUS AMARANTUS” as rather proudly written on one of the amphora.

This was further backed up by an election notice on the outside wall of the bar in which Amarantus urges his fellow Pompeians to vote for his favoured candidate in an election. Even more intriguing is the fact that a small room west of the entrance of house 12 had been left almost completely unexcavated by Maiuri, and had lapilli (rock fragments from the eruption) coming out of its doorway. Professor Wallace-Hadrill’s excavation of the room led to the rather unforeseen and astonishing unearthing of a skeleton of a mule, which had likely been used to transport the amphorae to the bar, and was presumably tethered to the wall when the eruption happened.

This mule was accompanied by the skeleton of a tiny dog, who had also met its fate in that room soon after the eruption – an image which proved much more moving for the audience. Walnut pollen evidence from the mule’s bedding has revealed much about the poor condition of the house and stable at the time of the eruption.

Amarantus’ name also appears in more graffiti found elsewhere in the neighbourhood. On a wall a few blocks down we see a picture of  two crudely drawn men, of which we believe the man sporting a rather long nose or alternatively the bearded man pictured next to a scrawled ‘Hello Amarantus, hello’ is a charming picture of Amarantus himself. Upon studying the particular individual of Amarantus, Professor Wallace-Hadrill proves to us how by using archaeological artefacts at a site, we can piece them together to build a fantastic image and knowledge of the lives of the people who lived and interacted within these areas.

Moving on from Amarantus and Pompeii, Professor Wallace-Hadrill shifted our attention to Herculaneum. This small town has an abundance of small shops with remarkably well-preserved wooden doors, walls and balconies. These shops were alongside opulent houses, making it one of the best examples of how a Roman town could have people of different levels of wealth and class living next to each other. Professor Wallace-Hadrill told us that it is, in fact, the latrines of all these small shops, businesses and apartments that give us the best insight into the lives of the ancient residents of Herculaneum as their contents disappeared beneath these bustling streets. The contents of the town’s sewers give unprecedented insight into what ancient ordinary Romans ate, with over 100 different food items discovered including spices, egg shells, vegetables, fruit such as figs, and, most surprisingly, a huge variety of different fish all encased in tonnes and tonnes of coprolites (fossilised faeces!). Upon analysing these fishbones, it became evident that the otoliths were also digested, which allows us to draw the conclusion that the people of Herculaneum ate their fish whole, even the head. This analysis of the sewers of the people of Herculaneum, encapsulates how their diet was rich and varied no matter if they were rich or poor. 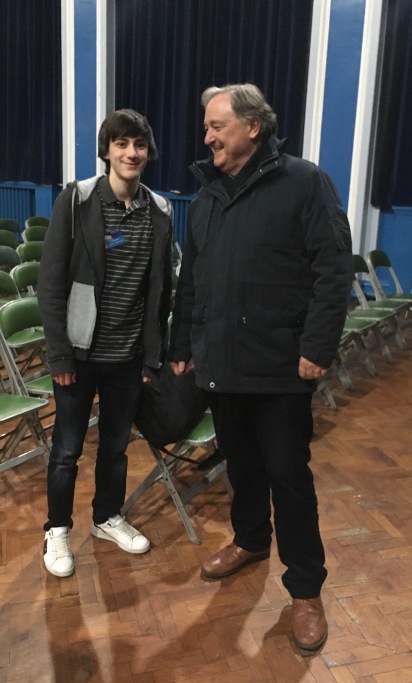 Meeting the great man himself!

I would personally like to thank Professor Andrew Wallace-Hadrill for his captivating lecture, which highlighted just how crucial archaeology is for our understanding of the classical world of antiquities. From the life of ordinary people in Pompeii like Amarantus, to the lavish and varied diet of those living at Herculaneum, excavating the ancient world always brings us something new and exciting!