Adam Hart-Davis is a BAFTA nominated television presenter, author and photographer perhaps best known for his innovative science programmes and the hugely successful historical series What the Romans Did for Us, with later spin-offs covering the Ancients, Victorians, Tudors and Stuarts. With his background as a scientist, he was one of the first to take an innovative approach to the teaching of history; long before “STEM” was used in everyday speech, he had realised that the inventions and innovations of the past were a story worth telling. Adam’s programmes for the BBC were humorous and hands-on, and the popularity of his television shows was a likely reason why last Thursday night more than three hundred visitors braved the torrential rain that battered Lancashire to come to the first lecture of the LSA CA’s new Season to discover “What the Romans and Greeks did for us”. 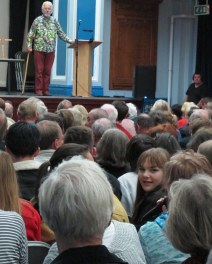 Adam’s first contact with the classical world was as a schoolboy, learning Greek. And in what may be a first for a lecture at the Association, Adam proved how well he still remembers those lessons…by singing lines of Homer to us. Once he had transported us back to ancient Greece, he began with the remarkable story of the Tunnel of Eupalinos, on the island of Samos. Built in the 6th century as an aqueduct, the tunnel was dug from both ends through the limestone of Mount Kastro, with nothing more than hammers and chisels. Even more impressive was the geometry and engineering used by both groups of excavators in order to meet each other precisely in the middle of the mountain.

The tunnel chiseled out by hand through Mt Kastro,always bending so that horses would never see the light and bolt!

Although the identities of those who produced that feat of engineering are not known, Adam also spoke with great passion about a number of Ancient Greek mathematicians, innovators and scientists of whom more has been documented. These included Eratosthenes, who accurately calculated the size of the earth and developed a mathematical sieve to find prime numbers (thank you Eratosthenes, it really does work).

There was also the remarkable Heron of Alexandria, who developed the first steam engine, the aeliopile, which amazingly was used in the ancient world as an elaborate toy (rather than kick-starting an Ancient Greek Industrial Revolution). And just to remind us that not every Greek scientist was a genius, Adam made us chuckle with the story of Empedocles of Sicily, whose flawed scientific hypothesis of his own immortality resulted in him throwing himself into Mount Etna.

Empedocles, before his remarkable suicide

Another Sicilian, Archimedes of Syracuse, was, however, without doubt a genius. He is best known to us for his Eureka moment, but through Adam’s talk, we also discovered that he was considered one of the greatest mathematicians of antiquity, especially known for his mathematical proofs. He was admired by other great minds of his time such as Eratosthenes, and was held in such high esteem that his tombstone (sadly lost to us) was later visited by the likes of Cicero.

And so it was to the Romans that we next turned our attention. Although it was clear that Adam felt that they were remarkable organisers, they were likely in debt to Greek ingenuity. Nevertheless, there seems that we still have much to thank the Romans for.

A humorous slide of Adam, oiled up and handling a strigil, surrounded by candles, wine and a game of dice, certainly made the point that one of the things the Romans did was introduce us ‘backward Britons’ to the good life. It wasn’t just public baths and exotic foods that they brought our way. Advances in engineering resulted in hypocausts (underfloor heating) which kept those mosaic floors cosy, and aqueducts delivered clean running water to those famous Roman toilets. And thanks to attending the lecture, I am now aware of the existence of Cloacina, the Roman goddess of sewers, and the poem about her by Lord Byron (Adam is after all a proud member of the British Toilet Association)! 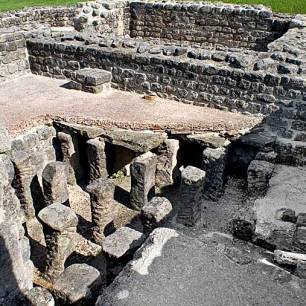 The Romans also transformed our outdoor landscape, bringing to an end the wattle and daub roundhouses of the Celts and replacing them with prefabricated forts, built from square edged, precisely sawn wooden blocks. And the perfectly straight and level roads for which they are so well known were only possible because of the Roman surveyors’ use of the spirit level and a fascinating engineering device called a groma, a replica of which Adam brought along to demonstrate to us. 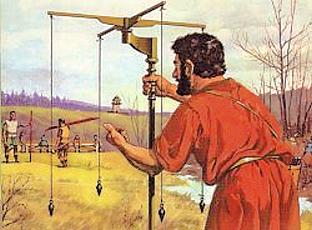 Adam’s huge enthusiasm for science, technology and engineering in the ancient world, and his ability to explain very complicated ideas in a way that we could all understand, was evident throughout his lecture. At the close of the talk, it was clear from the huge applause of the audience that we all knew what Adam Hart- Davies had done for us that evening. He had started the new lecture season for the LSA CA in style!

Thanks so much to all of our volunteers for thriving on such a busy night, to AKS Lytham for the lovely venue and to all 303 members and visitors for enduring the rain to come and join our ever-growing Classics Community! We look forward to welcoming everyone to our next lecture with Dr Simon Elliott on the 18th October.