“The Imperial Crisis of the 3rd Century AD is one of the most obscure periods of Roman history. The Crisis of the Third Century was summarised by Dr Harry Sidebottom as ‘too many Emperors in too few years.’ In just a 50-year period there were at least 26 claimants to the title of Emperor, most of whom were generals in the Roman army leading to what Dr Sidebottom described as ‘The Age of the Soldier Emperors.’ Dr Sidebottom told us that this was largely because the system of Imperial succession was one that legitimised usurpers. In Augustus’ attempt to achieve all the authority of a king without actually taking on that title, he had made it so that as long as the successor was voted Tribunicia Potestas and Imperium Maius they would be just as legitimate as their predecessor.

While there was undeniably a military and political crisis, Dr Sidebottom explained to us that, in his view, the idea of the Empire being in a ‘total crisis’ that affected every aspect of life under the Empire is highly unlikely. The ideology and economy of the Empire was, perhaps surprisingly, left largely undamaged by this age of political strife. However, Dr Sidebottom didn’t want to spend the lecture explaining to us what crisis was, instead he put to us the question of why this happened and whether it can be considered Rome’s own fault.

Now this blog could be over very quickly by just saying yes. It was Rome’s fault. It’s all Rome’s fault and they probably deserved it too. With that being said, it wouldn’t make a very interesting blog, nor would it do anywhere near enough justice to Dr Sidebottom’s fantastic lecture, so that’s not going to be the case. It so happened that Rome’s management of its eastern and northern frontiers was rather counter-productive. The norm for Roman foreign policy against their long-time rival, Parthia, had always been one of extreme aggression in order to protect the Salus or wellbeing of the Empire. As Dr Sidebottom quoted: ‘so it was not so much that Rome had a Parthian problem, more that Parthia had a Roman one’. Rome’s aggressive foreign policy towards the Parthians undermined the credibility of the Arsacid dynasty, leading to internal strife and soon enough Ardashir I was appointed shahanshah, king of kings, of the new Sassanid Empire. These would prove to be far more aggressive than their Parthian predecessors and, unfortunately for Rome, far more capable at siege warfare. This new eastern threat would prove to split the focus of the Roman army, (as) it would have to defend against powerful enemies on more than one front.

If the eastern threat wasn’t bad enough, it transpired that the northern frontier wasn’t in much better shape. While eastern barbarians had been considered devious, tricky and cunning, the northern barbarians had been placed under the stereotype of strong, stupid and disorganised. Rome had never considered the possibility that the northerners had the capacity to adapt. Shockingly enough, this was a very stupid mistake. It transpired that a ‘kaleidoscope’ of tiny tribes north of the Danube had formed several much larger, much more dangerous federations. Not only this, but many northern barbarians had been hired by the Roman military as auxiliaries, taking home with them not only Roman fighting tactics, but knowledge of their advanced system of supply lines. This allowed for the barbarians to field much more disciplined, better trained and larger armies to better withstand the Roman military. It wouldn’t be hard to imagine that the Romans had started to adopt a taste in painting large targets on their sandals with the amount of shooting they seemed to be doing in that general direction.

It came to pass that Roman armies started to lose significantly against their barbarian opponents, sometimes losing tens of thousands of men. This era also saw the first ever Roman Emperors to be captured (Valerian) and killed (Trajan Decius) in battle. The former of these, Dr Sidebottom told us, was kept as a mounting block by his Persian captor, Shapur, and told each day to ‘remember that this is real and the statues of Rome are not.’  In a rather gruesome turn of events, upon his death, Valerian was stuffed with straw, dyed purple and hung from the ceiling of the palace to evoke fear in all future ambassadors from Rome. Points for inventiveness are in order. It so happened that these two disasters fell rather nicely into the hands of the Christian population of the Empire, even though at the time Christianity was little more than a minor cult. These two rulers had been famous for their persecution of Christians, ordering them to sacrifice to the Roman gods or face punishment (with Valerian’s being rather a lot more severe). While this hardly sparked widespread Christian conversions, it did give many Pagans pause for thought. Perhaps there was something to this new god after all.

Another major issue that contributed towards this crisis that Dr Sidebottom pointed out at the end of the lecture was there was no other institution within the Roman Empire that could ever come close to rivalling the power of her military. As the need for able generals began to outweigh the need to pander to aristocratic families through appointments to commanding offices, the Roman army became a vehicle of social mobility. While this meant that the army had more skilled commanders, it severely undermined the authority of the reigning Emperor. With a war on two fronts, it became very apparent that the Emperor could never be in more than one place at a time, if he was already engaged and there was some sort of uprising he would have to send a deputy on his behalf. Either way this would end badly. If his deputy was unsuccessful then it reflects poorly on the Empire; if he succeeds in his mission then his troops might see their commander as a more able candidate to be ruler, especially if the current Emperor’s campaign is going poorly. This, combined with more effective barbarians on both fronts and the fact that anyone who proved themselves able could be hailed as Caesar meant that holding onto the position of Emperor was a much more difficult task than it may seem. Dr Sidebottom pointed out that before AD 235 the average length of reign was 9 years and from the start of the crisis it dropped to just 18 months. The phrase ‘too many Emperors in too few years’ certainly begins to ring true.

Now you’d expect that any period of political and military strife to have plenty of contemporary source material, surely there’d be countless people wanting to record the interesting events that are transpiring? Apparently, this isn’t the case whatsoever. Fortunately, this plays very well into Dr Sidebottom’s hands because, as he put it, ‘nobody can prove me wrong!’ which makes it the perfect place to base a piece of historical fiction. While the idea of the Historia Augusta being written by a spiteful schoolmaster pretending to be six other authors one hundred years earlier in an attempt to take his revenge on the world may be a rather amusing thought, it doesn’t lend much to our already clouded understanding of the 3rd Century. Even more so when events, figures and even Emperors are fabricated for the author’s amusement. With this being said, Dr Sidebottom took great pleasure in letting us know that such an obscure piece of writing does make an outstanding resource for a novelist. 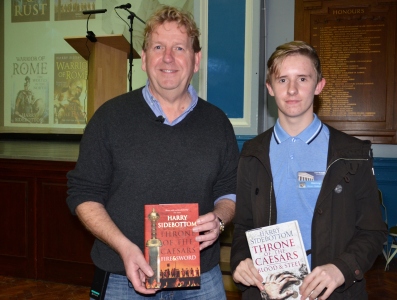 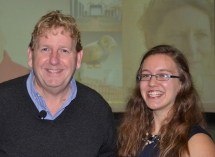 We thank Dr Sidebottom for his fantastic lecture and superb speaking ability that made for such an insightful and entertaining evening. Another thank you is in order for fellow Student Ambassador Harvey Phythian for his wonderful vote of thanks and of course to all of the members of the Association who continue to support our programmes. We look forward to seeing as many of you as possible on the 9th of November for Dr Margaret Mountford’s upcoming lecture. 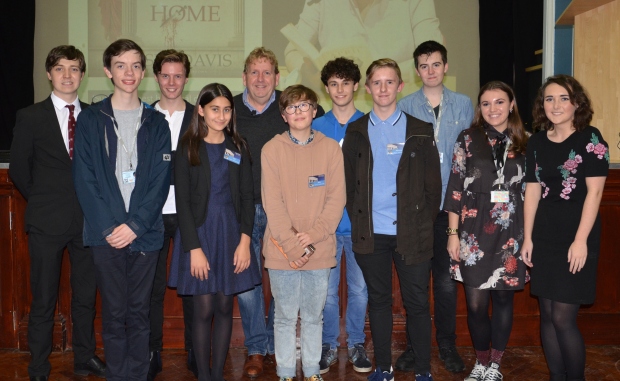