This Thursday we enjoyed a night of illumination rather than blindness when David Raeburn, producer of countless Greek plays and former tutor at New College Oxford, made the journey to Lytham St Annes to talk to us about the performance of Oedipus Tyrannos – Sophocles’ most famous play and arguably one of the greatest works of European literature.

David took us on a tour of the very origins of tragedy (a composite of orally-composed and transmitted poetry, and the choral ritual tradition) and gave us a gripping account of the background to the Theban myth. He then highlighted the problems Sophocles would have faced: how could he tell a story that relies on the power of dramatic irony and includes flashbacks/pivotal information from the past in a continuous narrative? How could he show Oedipus’ character failings in tandem with his innocence and ignorance, or elicit sympathy and revulsion in equal measure for the man who unwittingly committed both parricide and incest?

He emphasised the skill of the actors who played so many roles and largely relied on the projection of their voice and their physical movements to convey great moral torment and even physical pain, for example, after Oedipus’ self blinding. The stand out feature of the evening, however, was David’s reading of several sections of the play’s choral odes: he read with such metrical precision, rhythmical force and indeed visible passion that the audience were quite stunned by the authenticity of the language and the power of an almost-nonagenarian! 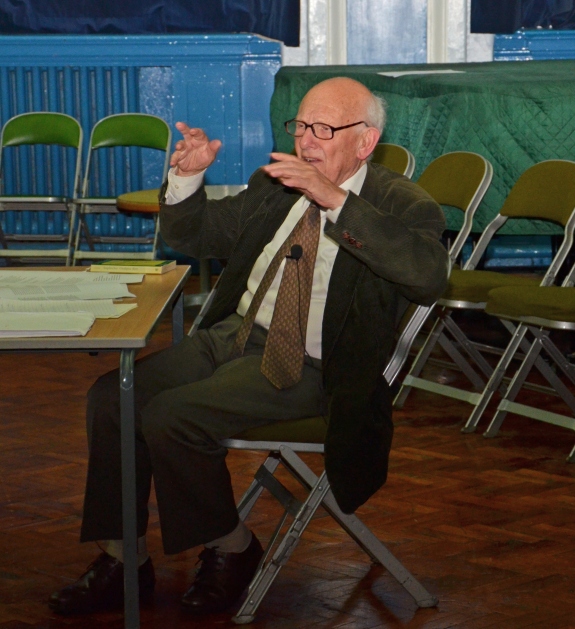 David also made us think about the very human dilemmas that Greek tragedy presents: are we all destined for a fate? Can oracles or divine intervention be avoided? Is pride ever a good thing or does it always lead to hubris? Should we actively seek out our own identity? Oedipus strives to rid his city of a curse but when he catches the culprit he ensnares himself; when he sees the light of truth, all that follows is darkness. We are taught that vision is no replacement for knowledge, and although the play has all the elements of pure tragedy (with pride before a Fall, messenger speeches, revelations, curses and death), David uncovered the more positive message – that we must all accept that we are men, not gods, and live our lives accordingly.

It was a thrilling start to the new season, and 126 members and visitors were struck by the power of the Greek language when spoken by an expert with such an obvious love for the poetry and drama of tragedy: as Gerry Corless said in thanks to Mr Raeburn, ‘you have set the bar so high – if the rest of our lecturers are any better, they will be out of this world’! We would like to thank David again for being so generous with his time and expertise, and Oxford Classics Outreach for enabling this event. Thanks to all the volunteers who helped the evening run smoothly: we look forward to welcoming you all again on October 20th for Ben Kane’s talk ‘the Massacre in the Forest: Rome’s greatest defeat?’ Once again, doors open at 6.15 for the talk at 7pm, there will be refreshments and homemade cake available, and entry is only £5 on the door or free to members. See you there!