Christopher Marlowe’s Dido, Queen of Carthage, currently playing at the Royal Shakespeare Theatre, is widely recognised as a full on homage to Virgil’s Aeneid Book IV. Ben Jonson, a playwright with a pretty high opinion of his own intellect, famously described William Shakespeare as possessing “small Latin and less Greek”. But this could never be an accusation he could direct at his other contemporary, Marlowe, whose plays are often filled with learned references to the Classics; this stage version of the doomed affair of Aeneas and Dido, written while still an undergraduate at Corpus Christi, Cambridge, clearly exhibits his brilliance as a scholar of the ancient world. 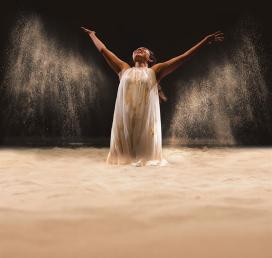 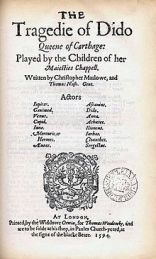 The RSC, despite its name, has always been a place where even those left cold by the Bard, can find something to enjoy. In fact last year, Marlowe’s Dr Faustus, played by the mesmerising actor Sandy Grierson, was probably the most terrifying yet exhilarating theatre experience I have ever had at the RSC. After attending Dr Gail Trimble’s excellent lecture on the Aeneid at the Association earlier this year (see our Chair’s blog here), I certainly felt better informed about the overall story by Virgil, so I was looking forward to Dido.

As a production, it seemed to have all the right ingredients; in particular, Grierson was playing Aeneas and the Yale – and RADA – educated Chipo Chung was making her RSC debut as Dido. Chung’s real life story of having migrated from Zimbabwe to forge a successful acting and activist career on both sides of the Atlantic, suggested that she might bring something special to the role of the North African sovereign.

The play starts with Marlowe at his impish and inventive best – a white haired and suited Jupiter enters the arena to rock music and thunder. After eyeing up the audience, he turns his attentions to his preening toy boy, Ganymede, who stands apart, almost as disinterested as Aeneas will become later, while slurping from a bottle (of ambrosia?). Meanwhile, Juno throws shade at them from the stalls. Venus, in red of course, is kept in a state of delight with the help of a hypodermic needle from Cupid, and Mercury is crashed out on the floor at the back of the stage. The gods are having fun, and the welfare of the son of Venus, battling the waves down below, is far from their minds. 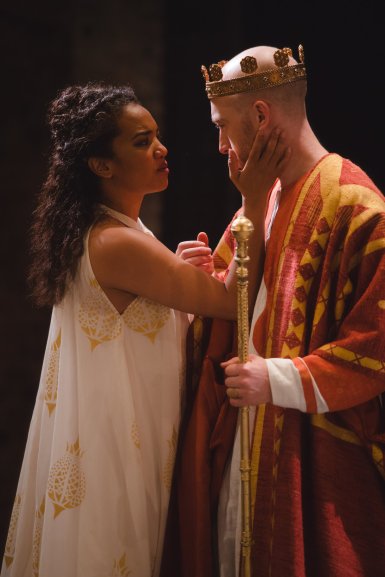 The story quickly changes to that of Aeneas, shipwrecked off the coast of Carthage with his son Ascanius and his fellow Trojans; after a generous welcome from Dido, Aeneas’ repayment for her hospitality (and then, love) is to jilt her in the most insensitive way. The Virgil propaganda machine against Dido/Cleopatra is pretty hard to ignore but Marlowe gives Dido dignity and humanity, plus the title of the play, and most of the best lines, which Chung articulates with crystal clear diction and regal bearing.

The Aeneas of this stage version is most definitely not the Augustan hero. Sandy Grierson plays him to perfection, first as aloof, then indecisive but tempted by Carthage’s wealth rather than Dido, and finally as he leaves to fulfil his destiny, without regret. Nevertheless, watching his bewildered face as he describes the fall of Troy and children swimming in their parents’ blood, it did make me wonder whether shell shock from war, as much as the meddling gods, might be Aeneas’ problem.

There are some other magnificent aspects to this production. The music accompanying any stage performance is incredibly important to me and the RSC musicians, as always, deliver, with Mediterranean and African influenced songs alternating with jazz and guitar riffs which all lift the mood when matters plunge (quite often) into despair. As well as the Jupiter/Ganymede partnership, the sparring between Juno and Venus, a pair of alpha females, who despite their mutual loathing and distrust are forced to work together, was amusingly done. Another highlight was the furious Latin dialogue between Dido and Aeneas when they have their first, relationship wrecking row – imagine the advantages of being able to backchat in fluent Latin!

But the cleverness of the text also makes Dido a complex play, and the richness of the exchanges between the many actors can sometimes feel overwhelming. In addition, Marlowe has added several characters not in the original Aeneid, and to my mind they add little extra value. The suicide of Dido is followed by her (fictitious) spurned lover, Iarbas – these extensions to the story feel unnecessary, and dull the emotional impact of Dido’s death.

However, to increase my understanding of this and indeed any RSC production, I can always rely on the programme notes; for Dido these include an excellent essay by Professor Edith Hall, who gives us not only a comprehensive overview of the play but also informs us that the Carthaginians own version of Dido was very different from that of the Romans. Their “Dido”, known as Elissa, was a Phoenician princess who built up Carthage, in modern day Tunisia, from scratch, and was anything but a victim in her lifetime.

More food for thought is contained in a second piece, written by the novelist and playwright John Spurling. He proposes that Marlowe, more than a bit of a pagan himself, used the tales of the gods and their tangled, controversial lives, as a way of exciting and stimulating his Elizabethan audience without causing direct offence to anyone. Spurling argues that a similar situation still exists today; the myths of ancient Greece and Rome allow us all to enjoy art, drama, literature and freedom of thought without fear of trolling by those who hold a particular religious or political view. Yet another reason to study the Classics, if ever one was needed.

Click the link to view the RSC’s video diary of Dido, Queen of Carthage.  where Chipo Chung visits Tunisia to see the ruins of the ancient city of Carthage, to learn more about Carthage and its extraordinary founder.

The RSC’s Rome season continues with Shakespeare’s Antony and Cleopatra and Julius Caesar at the Barbican Theatre, London until January 2018, and there is Ovid and Cicero on the menu at Stratford upon Avon from October 2017 onwards. Dido, Queen of Carthage, runs till the 28th October 2017, at the Swan Theatre, RSC. 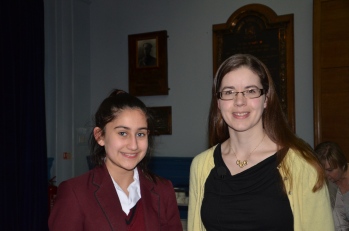 All’s Equal in Democratic Athens – NOT!