The gods of Greece and Rome are unavoidable. They are woven into the fabric of the world almost everywhere you look – even if you don’t realise it. In a fascinating lecture, eloquently launching the Association’s fourth season, Dr Caroline Vout, art historian and university reader at Christ’s College Cambridge, opened the door to an entirely new way of seeing art and the gods of the ancient world. 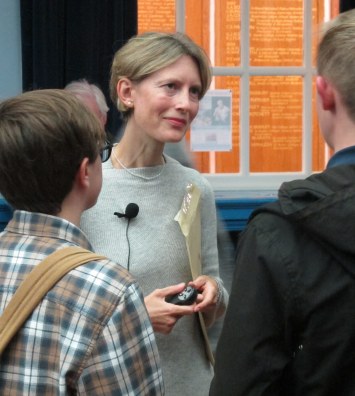 Of course, if someone wants to know all of the weird and wonderful stories about the gods, about Zeus and Ganymede, or even the relatively concerning yet typically Greek tale of Leda and the swan, the first instinct is to pick up a book, perhaps The Iliad or some works of Hesiod – but why not take a look at art? There is a world of paintings, relief sculptures and free-standing sculptures that can capture what literature cannot; it can conjure up an image of the gods for you, and it is because of these works of art that we see the gods of Greece and Rome as we do. This is a feat that, as Dr Vout showed us, is no easy task.

When anybody reads a book or is told a story, they will use their imagination to paint themselves an image of what they are taking in, so that each recipient of this tale will have their own unique take on the world that they are diving into. With art, however, the imagery is handed to them – it stands before them, in whatever form the artist has decided upon. Sometimes this is seen as a good thing, a way of seeing into the artist’s mind to understand how they see the world. But the question raised by Dr Vout was this: how can a god, a being that transcends mortality and humanity, that can appear as it pleases be pinned down and condensed into a sculpture or a painting? Surely this would be a tremendously bold act of hubris, and yet there is a plethora of portrayals of the gods, varying throughout time and depicting them in a wide range of ways.

Dr Vout took us on a journey through time, starting in the sixth century BCE and ending up in the world of Christianity, to show us how artists managed to achieve what is essentially a depiction (or more than one depiction) of a god that does not pin them down into one form or to suggest that they may be on the same level as us mere mortals. Athene was the first case study on the list. Every Classicist knows how to recognise Athene – simply by looking for her aegis, her spear and her armour-clad physique. If this is the case, then how can she remain ethereal, dynamic and untouchable? Perhaps the best example shown to us by Dr Vout is the “chryselephantine” Athene Parthenos, found inside the naos of the Parthenon. I write “chryselephantine” as such seeing that Athene Parthenos is not entirely gold and ivory – she is a wooden frame, covered in gold with ivory attachments and accessories. Some may say that this makes her “rotten at the core”, but others, as Dr Vout wisely pointed out, will see that this is not the case, as she isn’t a body, but a mirage, “there but not there” as Dr Vout put it.

The impressive pool cleverly placed in front of Athene Parthenos also adds to this feeling of awe and divinity, by creating a feeling of movement that the statue on its own could not do. Even aside from this awesome masterpiece, the Acropolis is scattered with traces of Athene, a multitude of statues that ultimately show us that there is no way that she can be pinned down. She is everywhere, all at once, like a true god.

Athene is but one case of many. The goddess of love, Aphrodite, brought about a whole new way of separating the divine from the mortal – nudity. Aphrodite of Knidos (or Knidian Aphrodite) was possibly the first statue of not just a woman, but a goddess, in the nude. It was so controversial that she was rejected by Kos, the island from which the work had been commissioned to Praxiteles. Unlike earlier, Archaic statues of goddesses or simply women in general (such as Peplos Kore and Berlin Kore), this Aphrodite is fully in the round, crafted in a way that invites the viewer to walk around her and take all of her in. No human could possibly be depicted like this. Praxiteles has created a portrayal of a goddess that is so heavily eroticised that it can only be a creature of divine nature. In fact, one man crept into the temple one night and tried to copulate with the statue – he was soon forced to throw himself off a cliff, though.

Not all interactions with the gods would have such dire consequences, fortunately. Dr Vout’s last case study to convey her point to us explained the ways in which many mortals in mythology have communed with the gods, and how artists have depicted such encounters. Well known stories like Zeus’ kidnapping of Ganymede and his rather aberrant sexual encounter with Leda show us what happens when a god is willing to engage like such. It is also clear from these stories and their accompanying artwork that any interaction with a god would be far beyond any social expectations, which only helps to embolden the line between gods and men. Dr Vout even touched upon Christianity. From the sixth century CE on, it became normal for Christ to be shown bearded. In early Christianity, however, he was often represented young and humane, a mere boy next to the towering, athletic physiques of gods like Zeus and Poseidon.

After an hour of Dr Vout’s wonderfully stimulating lecture, we were all excited by being shown the path to another way of seeing the ancient world and its theology. Arguably the most important message to come from the experience is that the gods lie in art as well as literature, in a totally unique and fascinating way. As Dr Vout said, “thinking with the visual” is what allows us contact with the theology and rituals of the Greeks and Romans, even if it’s a Roman mosaic of Venus in Yorkshire that looks like the work of a five-year-old. These works maintain a huge amount of status, and without them, and without Dr Caroline Vout’s fantastic illumination of their significance, the modern world wouldn’t understand its past as well as it does.